Has Thanksgiving lost its meaning? 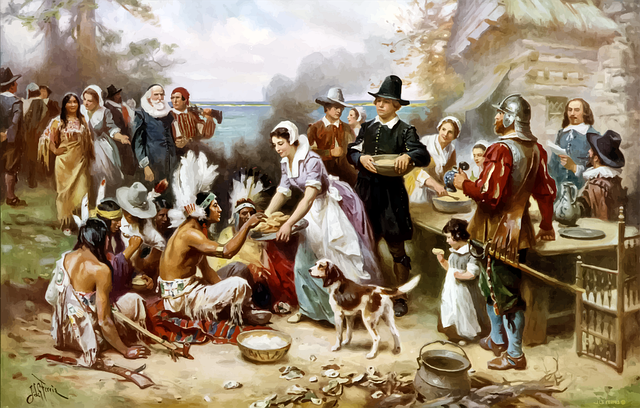 For many, Thanksgiving is a day for overeating and football followed by a mad dash for Black Friday specials. Stores are decorated for Christmas moments after the Halloween stuff comes down and Thanksgiving is mostly “celebrated” by on-air personalities who talk about the rising cost of Thanksgiving dinner and the number of people who will be traveling for the long holiday weekend. So, it may seem that Thanksgiving has lost its original meaning–a day set aside to thank God for America’s abundance and freedom.

The traditional First Thanksgiving was an acknowledgment by Pilgrims, who arrived on the Mayflower, that through God’s grace some of those travelers survived the first terrible winter of freezing and starvation. Those survivors were able to plant and harvest grains and vegetables that allowed the community to flourish. After their first harvest, they expressed thanks to God for His sustaining grace and for the help they received from nearby native communities.

Through the years, more and more English settlers arrived in the New World and harvest celebrations, like the ones they celebrated in the old country, became part of their annual rituals. Throughout New England, especially, an annual Thanksgiving was proclaimed. One hundred sixty-eight years after that first Thanksgiving feast along the shore of Cape Cod Bay, President George Washington, at the request of Congress called for Thursday, November 26th to be set aside as a day for prayer and giving thanks to God. Subsequent presidents, except for Thomas Jefferson, continued the tradition. Almost 75 years later, President Lincoln proclaimed Thursday, Nov. 26, 1863 as a National Thanksgiving Day. The 4th Thursday in November became the official date of Thanksgiving during the Presidency of Franklin Roosevelt.

So where does that leave Christians? Pagan harvest festivals predated and seem to form the basis for our Thanksgiving holiday. Christians don’t need a special day to thank God for his provisions, that is an everyday occurrence. They also shouldn’t give the day any more spiritual significance than any other day. But Thanksgiving does offer Christians an opportunity to reflect on God’s goodness to them in the death and resurrection of Jesus, their lord and savior. Likewise, it provides Christian moms and dads a time to retell the story of the First Thanksgiving and how God spared the Pilgrims and allowed them to enter a long period of friendship with natives who lived nearby. It also provides an opportunity to invite international students and recent immigrants into Christian homes to learn about this unique holiday.

So what are you thankful for? You don’t need to have a great job, or perfect family, or new car, or a big turkey dinner on Thanksgiving to realize that you probably have many reasons to be thankful. You might start by being thankful for what you have, instead of dwelling on what you don’t have.

Millions of people walk this earth with much less than you have, yet many of them enjoy contentment and are thankful for what they do have. Think about this.  If you live in America, you are already among the most blessed people on earth. And those blessings come directly or indirectly from God–the God who created everything, even you.  So take stock of your blessings and thank the God who has made them possible. Objects of your desire may fail you. People may let you down. But even if some things are not going your way right now, God still loves you, and He wants you to know contentment even in your suffering.

All that is required for true joy is a relationship with our Creator (Ps. 37:14), who wants us to be happy and to bless us with everything we need (Phil. 4:19), even though we may not think so. When we have a good relationship with God (Prov. 10:3), like Paul, an apostle of Jesus, we will learn in whatever situation to be content (Phil. 4:11-12). We will find that the most important thing that God can give us is Himself (Eph. 2:8-9). Once we have our eyes set on God, everything else falls into place (Matt. 6:33). Thank God with your whole heart this week!

If you would like to learn more about how you can enter into a relationship with the eternal God to whom we give thanks, we encourage you to read our blog post: How does one become a Christian?