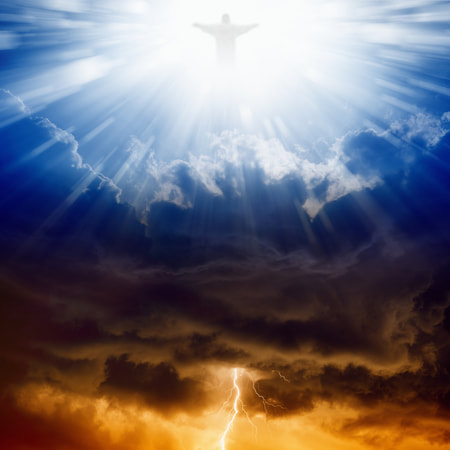 The Bible tells us that Jesus is actually coming again on two occasions.  The reason Jesus is coming again on the first occasion is to ‘take up from the earth’ those who believe in Him, both the living and the dead,  to be with Him forever. 0nly true believers will see Him at this event. This is the Hope of every Christian. The rest of the world will wonder what happened to all these people. Two of the Bible verses that describe this are:
“For the Lord himself will come down from heaven, with a loud command, with the voice of the archangel and with the trumpet call of God, and the dead in Christ will rise first. After that, we who are still alive and are left will be caught up together with them in the clouds to meet the Lord in the air……to be with the Lord forever.” (1 Thessalonians 4:16-18) (Note: Jesus does not set His foot on the earth in this event)

This first event will occur either shortly before the beginning of the Tribulation, or sometime during the Tribulation. The timing is a mystery as only God knows the day and hour for it to happen. The Tribulation is  a future period of seven years of suffering and persecution, especially for the Jews, during which God will pour out His wrath on all the other unbelieving nations of the world. (See Matthew 24 for the signs of the times for the Tribulation to commence.)

The reason Jesus is coming again for the last time, which is called the Second Coming of Christ, is to fulfill His promises, to defeat Satan and his army in the battle of Armageddon, and to rule the earth for one thousand years, called The Millennium.  Here Jesus comes to the earth and stays for a thousand years.   In Acts 1:10-11 the Bible states:

“They were looking intently up into the sky as He was going, when suddenly two men dressed in white stood beside them.  ‘Men of Galilee,’ they said, ‘why do you stand here looking into the sky? This same Jesus, who has been taken from you into heaven, will come back in the same way you have seen Him go into heaven.’”

This second and final return of Jesus will occur at the end of the Tribulation. Are you reconciled with God through faith in Jesus Christ so you will not be ‘Left Behind’ to experience God’s wrath and condemnation? You must be ready today because Jesus will come at an hour when you do not expect Him. No one knows if they will have tomorrow just like those on the Amtrak train wreck in Tacoma who perished unexpectedly.