If Jesus never sinned, how do you explain turning over the money-changers tables in the temple? 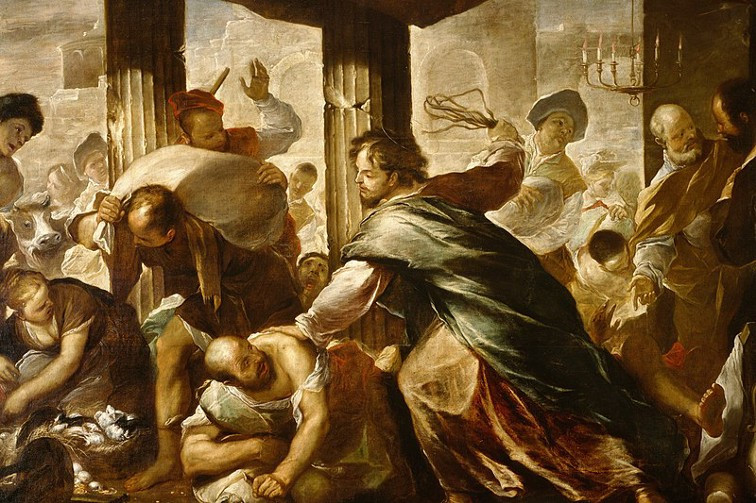 We read about Jesus clearing from the Temple the money changers and sellers of sacrificial animals in all four of the Gospels.

John records the first instance shortly after he is baptized at the outset of his ministry.

When it was almost time for the Jewish Passover, Jesus went up to Jerusalem. In the temple courts he found people selling cattle, sheep and doves, and others sitting at tables exchanging money. So he made a whip out of cords, and drove all from the temple courts, both sheep and cattle; he scattered the coins of the money changers and overturned their tables. To those who sold doves he said, “Get these out of here! Stop turning my Father’s house into a market!”
John 2:13-16.

The second incident was when Jesus entered Jerusalem prior to his arrest, trial and crucifixion. It was recorded by Mark and Luke as well as Matthew.

Jesus entered the temple courts and drove out all who were buying and selling there. He overturned the tables of the money changers and the benches of those selling doves. “It is written,” he said to them, “‘My house will be called a house of prayer,’ but you are making it ‘a den of robbers.’”
Matthew 21:12,13

In both instances, Jesus did not display anger because he couldn’t get his way, but because the priests and merchants had turned the most sacred place of worship into a religious bazaar. The motivation for Jesus’s anger was pure, not out of pride or selfish ambition that is the typical root of anger.

Jesus may have felt that the transactions were usurious—that the merchants were getting rich exchanging common money for temple coinage required for the temple tax—but the text doesn’t say that. What we read was Jesus’ objection to the commercialization of God’s house.

Anger is one of many emotions that God built into the heart and mind of every human. Throughout the Bible we read about God’s anger. Clearly, then, anger is not sin. However, what we’re angry about most certainly can be sin, and when we don’t check the emotion of anger we often behave in a sinful manner.

If anger is something you deal with, talk to God about getting it under control. One way to do that is getting into a right-relationship with God and then petitioning him for help. If you are not sure where you stand with God, we encourage you to check out our blog post: How does one become a Christian?