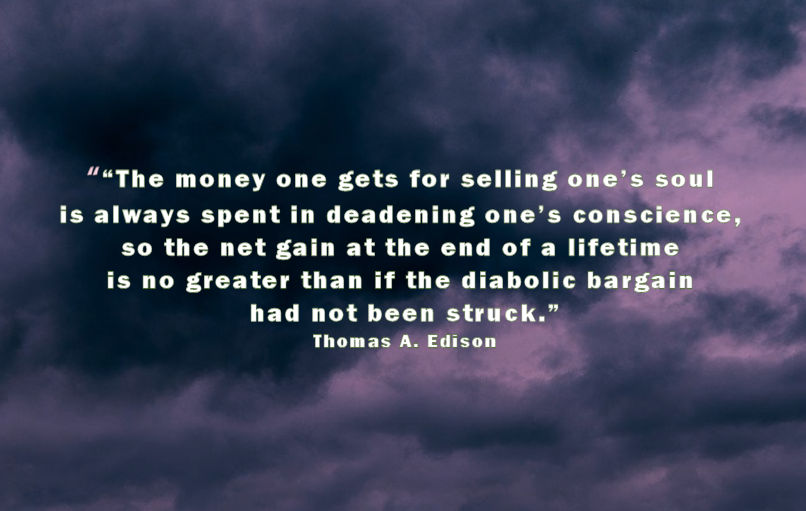 What does it mean to sell your soul?

Usually, when someone thinks of selling one’s soul, he or she thinks of selling it to the devil, aka Satan. The idea derives from an ancient German parable and subsequent Elizabethan play entitled The Tragicall History of the Life and Death of Doctor Faustus. Here a man exchanges his soul (that part of him that is eternal) for 24 years of pleasure, wealth and magical powers.

More commonly, the selling of one’s soul to the devil, is commonly associated with anyone who is willing to do that which is immoral, unseemly or otherwise evil, to amass wealth, gain power or fame, or achieve a seemingly unattainable degree of personal pleasure. Satan dangles all manner of temptation before individuals in an attempt to lure them away from his archenemy, God. He is so bold and so convinced of his personal power that he even tried to get Jesus to sell him his soul. Matthew records the story of this remarkable attempt by the devil to get Jesus to turn on God, his father.

Then Jesus was led by the Spirit into the wilderness to be tempted by the devil. After fasting forty days and forty nights, he was hungry. The tempter came to him and said, “If you are the Son of God, tell these stones to become bread.” Jesus answered, “It is written: ‘Man shall not live on bread alone, but on every word that comes from the mouth of God.’”

Then the devil took him to the holy city and had him stand on the highest point of the temple. “If you are the Son of God,” he said, “throw yourself down. For it is written:

“‘He will command his angels concerning you,
and they will lift you up in their hands,
so that you will not strike your foot against a stone.’”

Jesus answered him, “It is also written: ‘Do not put the Lord your God to the test.’”

Again, the devil took him to a very high mountain and showed him all the kingdoms of the world and their splendor. “All this I will give you,” he said, “if you will bow down and worship me.”

Jesus said to him, “Away from me, Satan! For it is written: ‘Worship the Lord your God, and serve him only.’”

Then the devil left him, and angels came and attended him.

Satan may influence an individual to do evil, but God always has the last word. No matter how great one’s sin, the price for that sin has already been paid in blood on a Roman cross 2000 years ago. Satan has been defeated and he has limited power on earth until Jesus returns and gets rid of evil forever. Satan’s power is defined in the Bible.

The power of deception

…Satan himself masquerades as an angel of light. It is not surprising, then, if his servants also masquerade as servants of righteousness. Their end will be what their actions deserve.

The power to challenge angels

But even the archangel Michael, when he was disputing with the devil about the body of Moses, did not himself dare to condemn him for slander but said, “The Lord rebuke you!”

The power to bring havoc

“Have you not put a hedge around him and his household and everything he has? You have blessed the work of his hands, so that his flocks and herds are spread throughout the land. But now stretch out your hand and strike everything he has, and he will surely curse you to your face.”The Lord said to Satan, “Very well, then, everything he has is in your power, but on the man himself do not lay a finger.”

Power that is limited

No temptation has overtaken you except what is common to mankind.  And God is faithful; he will not let you be tempted beyond what you can bear. But when you are tempted, he will also provide a way out so that you can endure it.

You don’t have to sell your soul to the devil to gain the greatest gift in the world…peace in this life and an eternity free from pain and suffering while feasting with the creator of the universe. If you haven’t already taken advantage of the gift of life that God offers, we encourage you to read our blogpost: How does one become a Christian?